Virginia
Humour, On life and living 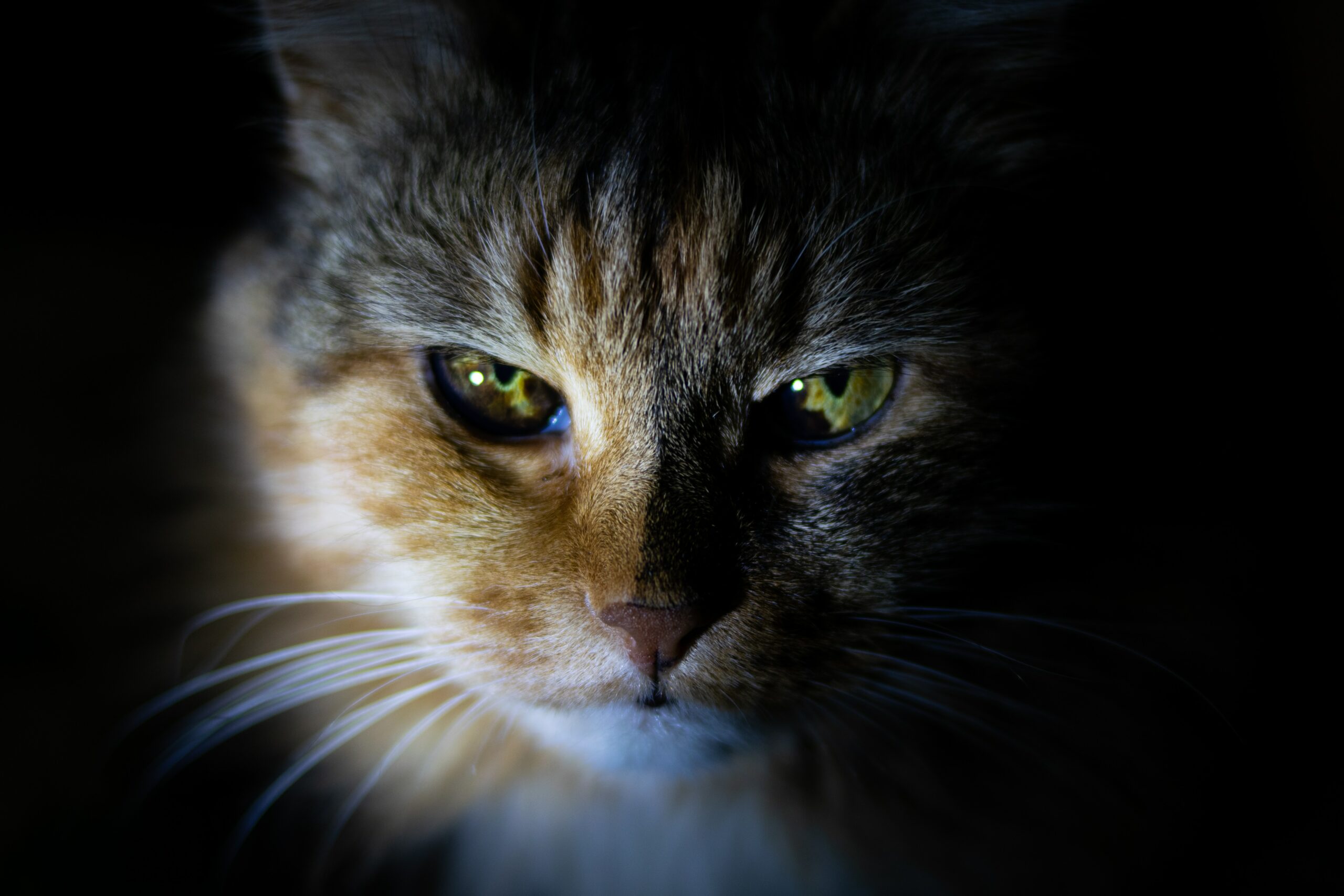 There was blood on the hall floor when I got up yesterday. Not a lot of blood. I was reasonably sure my husband hadn’t slaughtered someone while I was sleeping.

My first thought was that he had broken a glass and stepped on it. There was no broken glass in the garbage, though, so that theory didn’t pan out.

When I looked at the blood splotches more closely, they almost looked like paw prints. Maybe my cat, Hunter, had torn out one of his claws. He does that sometimes, God knows how. But he didn’t seem to be in any pain. In fact, he didn’t make an appearance for quite a while. When he did, he acted weird all day.

Normally, he wants to go out (and in, and out, and in, and out) on the deck as soon as he’s been fed in the morning. Hubby does that (feed him and let him in and out, I mean) at an ungodly early hour. I suspected that hadn’t happened that day. Both the screen and sliding door to the second story deck were closed. Normally it’s one or the other, but the previous night I had closed the sliding door over the screen and they were still in the same position.

When hubby came home, I confirmed that he hadn’t cut himself and Hunter had been acting weird in the morning, staying in the basement instead of coming upstairs to be fed. He spent most of the day down there and never once begged for treats.

To understand just how weird this behaviour is, you need to know his regular routine. Hunter has hubby twisted around his little paw. The first thing hubby has to do in the morning, before coffee, before shaving, before anything, really, is a) give Hunter canned food (kibble is for plebeian cats), b) give him a handful of treats (yes, a handful. Something like giving a baby a five dollar chocolate bar. He seriously needs to go on a diet.) and c) let Hunter in and out a kazillion times. He goes out to see what’s happening and comes in to check whether more treats have magically appeared in his bowl. Rinse and repeat until hubby leaves for work.

When hubby comes home, Hunter meets him at the door, complaining that I have given him zero treats all day and he’s starving, then leads him to the kitchen to make sure the situation is rectified. For the rest of the evening, every time hubby goes into the kitchen, Hunter escorts him, expecting and getting more treats. Utterly spoiled.

But yesterday, none of this happened. He acted like he had no interest in food of any kind and spent most of the day in the basement. Hubby said he thought Hunter found a mouse down there. Then in the evening, Hunter lay down in front of the fridge, staring intently at the tiny space between the fridge and the stove. Hubby said there must be a mouse there.

It’s not uncommon to have a mouse or two move in in the fall, looking for shelter, but we’ve never had one in the summer. But sure enough, a few minutes later Hunter was scrabbling around at the base of my chair, and I looked down to find a mouse there, barely alive. Hubby disposed of it and Hunter disappeared in search of another.

Hunter is well named. His predator instincts are strong and he is fast. He caught a bird in flight once. Luckily it wasn’t harmed and I was able to rescue and release it. He often finds a mouse on the deck and tries to bring it in. He acts so cocky when he has caught something. His demeanor screams, “Look what I brought you for supper.” But he has never eaten any of his prey, until now.

It must have been mouse blood on the floor, and this time Hunter ate the mouse. That’s why he wasn’t hungry. And why go out to hunt when you can do it in the comfort of your own home?

Mice being inside in summer is something of a puzzle, though. Surely they can smell the cat and it’s not like they’re escaping harsh winter conditions. The only reason I can find is that they’d rather take their chances with a cat than a pack of coyotes. We hear them frequently now, not just at night. And a hawk has been flying low over the yard lately, too.

It must be awful to be afraid to go out because you might end up being someone’s dinner. I’m glad I’m not a mouse. It’s a wonder there are any left. But I still don’t want them in my house.